Top 5 women who have marked the history of Marrakech

Beaten donkeys, dogs and cats empoisoned: Helga Heidrich is taking care of 300 animals. She needs help. Tina was there.

It is an early morning with a grey sky over Marrakesh. A gentle fresh wind blows on the compound of 7.5 hectars outside Marrakesh. This fresh air is welcome to all of the sheltered ones here.

200 dogs and 40 cats living in groups in big compounds. Among them there are sick ones, injured ones, limping ones, blind ones. A flock of 36 donkeys is nibbling the hey peacefully. There are 5 Barbary macaques, one mule, some peacocks, parrakeets, chameleons, one owl, a sheep, the turtle Zoé (40) and dromedary Ali Baba. This one looks like he wanted to be the guardian of all this population by watching out far away like a soldier.

Helga Heidrich likes this friendly and peaceful atmosphere in the early morning as well. Nearly all the animals have been feeded and the 2 employees, Hassan on one side, is cleaning the compounds and Fatma on the other side is feeding the cats. This moment allows Helga to have a quick break in company of Whisky, a donkey which needs medication because of a bad eye. Last night when Helga had put the drops in the eye, he took the chance to kick her in her leg. Today she is limping, but nevertheless Whisky is having caresses given by Helga because she is not the one to give up quickly and is giving all she can for her protégés.

It is quite unbelievable and you are asking yourself how she is handling and managing all this. It is a place far outside of the city by 40 minutes drive. She left her country of origin 25 years ago and went to Morocco with her son Marc (48). Here in Marrakesh she was managing the Spa of a luxury hotel and lived in a nice house with garden and pool. But then one day the hotel closed down and so did the Spa.

For Helga this evolution was like a chance to build up the animal shelter seriously. Because already at the times of the Spa she tried to save all animal mistreated. „When I see such scenes, I cannot close my eyes“ she says. This way the animal shelter story began. One day in the middle of the medina of Marrakesh she was facing a man who was beating his donkey laying on the floor. Because the car he had to pull was much too overloaded and too heavy, so he had collapsed. On the floor with hanging out tongue and bleeding wounds. Helga intervened, stopped the man from beating, organised a transport for the donkey to bring him to the veterinary clinic. Once the donkey was standing again, the owner wanted him back and Helga had to give him money to keep the donkey. This is how she had a donkey in her garden all of a sudden!

This is from the past. Today, instead of a good salary and the management of beauty treatments to rich Moroccon and foreign ladies, she is having a live much less chic in her shelter by caring for the mistreated animals. By making many many return trips to the veterinary clinic in the city, the vaccinations and sterilisations are made and the dogs are being chipped. She is working together with SPANA, an animal protecting organisation acting in the areas of Northern Africa. The administration, placing the animals to new families and the donations are managed by her foundation Helga Heidrich SOS Animaux.

Helga and her shelter is known also in Marrakech. « There are some tourists coming to adopt a dog or a cat and to take it with them. But most of times they just bring one pet they have found in the city to the shelter and leave it there“.

Now the dogs are barking and there seems to be a reason for. We see a car passing on the pist in front of the shelter, but even once the car is far away, the dogs are still barking. That’s why we are going to the yard gate to check what is going on. There we find 2 bags with 12 dog puppies. Thrown out by the people in the car. We are shocked but have to take care of them immediately. We give them water and put them in the shadow. Later Helga brings them to the veterinary to check if they are sick or in good condition. Also a rabies check has to be done. This means 12 additional fresh pets in the shelter but it is becoming critical to have a place and food for them. And there is a budgetary problem, which is quite serious. Pet food, medication and veterinary expenses for 300 protégés…. The main problem is the growing number of pets in the shelter, because new ones arrive but very few are adopted and placed in families. In addition to this Helgas’ son went back to Germany 2 years ago and she is therefore all alone to face the daily struggle. But all this is not holding her back to continue. Just for the animals. It is a lot of responsability, yes. But the pets are grateful for having a safe life. When I ask her whether she does not feel lonely, she replies that not at all, having all this company. And when whistling, the dogs which are not locked up in compounds, come close to her and she introduces them: here we have Steffi Graf, Facebook, Rudi Kargus, Tina Turner …. They are just adorable.

Every animal has his name, because everyone is unique. Maybe the names of famous people underline this even more. Like a dog that Helga has taken away half dead from a small van transporting empoisoned stray dogs. The driver was menacing her, but no way to make her change her mind. She brought the dog to the veterinary where she was told that there was not a big chance for him to survive. But she insisted that they should try their best. And the dog survived, has become quite a beauty and was given the name «Lady Diana». She would love to be with a family ! Like many of her co-protégés which would prefer having a live in a family or with an owner than in the shelter. Because here it is hard to find time to spend with each one. But for Helga it is preferable having them all here as long as there is no new owner who takes care.

Because here they are not starving and are not beaten as they were in their former lives.

After a while we are checking the dog puppies and see them sleeping  like spoons. Helga does not know where to put them but no way to let them alone which would have lead them to certain death.

Yes, we have to take action and take care, this is also what I’m thinking. And I hope that Helga is able to act like this for a very long time.

The day at the shelter is almost over and it is time to say goodbye. I do not want to leave. And while I am going towards the yard gate I come across the limping donkey lady which likes to be caressed behind the ears. And at that moment I have the idea of getting her godmother !

Helga is happy and I am so glad to have a donkey in Marrakesh!

Article by A.C. in “Made of Marrakech”
At the Foundation Helga Heidrich SOS Animaux en détresse, several animals rescued with dedication and determination by Helga died of rabies due to the lack of vaccines available. These donkeys, dogs or cats, all survivors of the street, were purchased by the Foundation, received veterinary care, were castrated, fed and pampered, and finally died of rabies… On Helga’s side, annihilation is mixed with anger, especially since rabies is a terrible disease, which takes the animals into agony. Even if, beforehand, a simple vaccine would have definitively protected them! Let us be many to support Helga’s action. It needs funds, and above all a general awareness to provide the hundreds of animals with the care they need, including, as a priority, a proper vaccination campaign. In addition, Helga is an activist for the protection of endangered animal and plant species. Here is an association that has all right….

SOS ANIMALS, THE NOAH’S ARK IN THE DESERT

Article in DOGS Magazine
A graveyard for abused animals on the outskirts of Marrakech: Where there used to be wasteland, the German Helga Heidrich operates animal protection in a simple but effective way. And she has been doing so for eighteen years. But now the refuge is in danger and with it Helga’s over 300 protégés. Marrakech is spreading, and the villas are growing ever closer to the Gnadenhof. The barking of dogs is not very popular with the house owners. Stefan Volk visited the committed Westphalian woman and her animals for DOGS …
Lesen Sie mehr:
DOGS_Magazin_Volk_Ache-Noah Pdf (ca. 5MB)

Report on “www.planeteanimaux.com
In Morocco, animals face great suffering. That’s why a German woman, named Helga Heidrich, left everything behind to settle in the middle of the dunes to the west of Marrakech to help them. Planète Animaux takes you to meet this great lady of animal protection…More:

More:
Le Paradis pour Animaux d’Helga
The report can be found on page 15 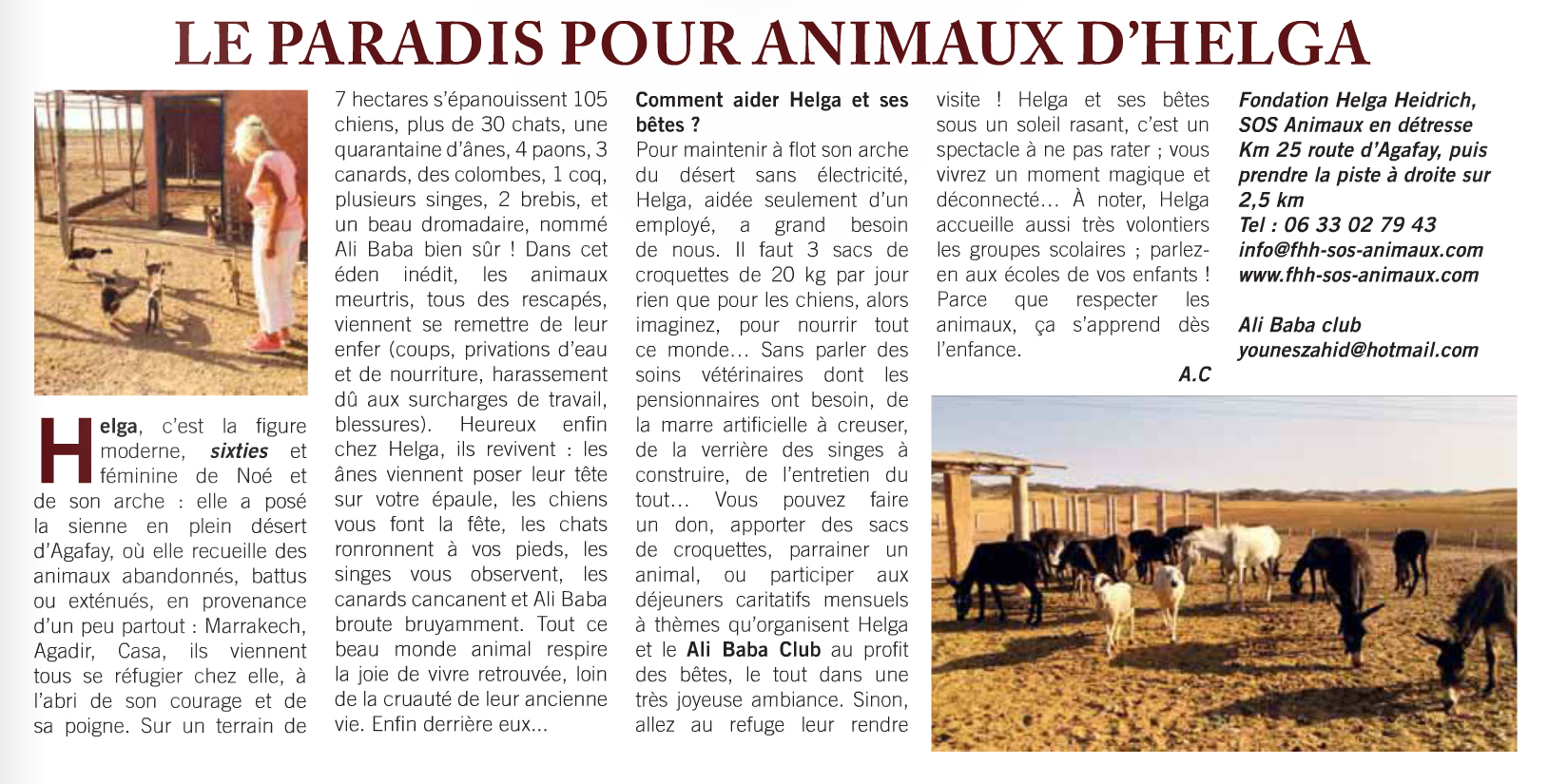 TO THE EXILES OF JAMAAA EL FNA

Report on “bladi.net”
Established in Morocco for about thirty years, the German Helga Heidrich has made it her mission to help abandoned or abused animals. With her own money and sometimes with the blocking of the Moroccan administration, she built several shelters in the Marrakech region…